MAWP is a proud supporter of music, art, literature and photography in all their
varied forms. As such we try to preserve and promote as much of our local culture
and those actively producing it as we can, as well as remembering those from the
past. Here are a few locals you might enjoy: 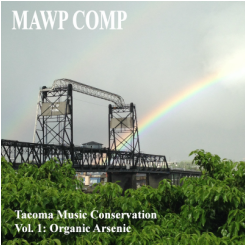 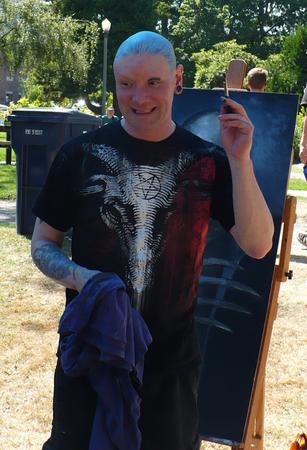 
A native New Yorker by birth, Larkin has called many places
home. Now a resident of Tacoma, Larkin's visceral style and
independent spirit has inspired a loyal local following. He
paints in acrylics and is incorporating crochet in to his work;
loves bunnies, and his Mom and Dad, and has a wonderful
singing voice as well if you are fortunate enough to coax a
tune out of him!


He exhibits his work regionally, nationally and
internationally and was our Featured Local Artist
at the 2012 MAWP Festival.

You can find Larkin on ﻿Facebook﻿!
And here on DeviantArt.com 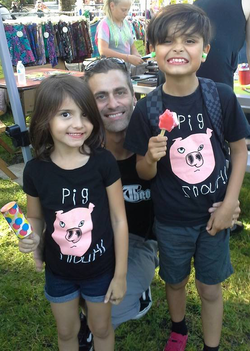 
Justin, Lucien and Dahlia are Pig Snout. This Tacoma power
trio debuted in 2014 and has been stunning audiences ever
since. Their appearance at the 2014 MAWP Festival was a
highlight of the show, and they won the hearts of many
local fans and musicians that day.


Comprised of father Justin, 9 year old Lucien, and 6 year
old Dahlia, this family band truly embodies what Music
and Art in Wright Park is all about.

Gary Lappier was raised in Sumner, and is a long time resident of Tacoma. A graduate of Evergreen State College, Gary has a passion for art, music and photography.

His musicianship can most often be heard showcased in the experimental music project he leads, Terrapin. Weaving an ambient and ethereal, often improvised guitar tapestry, his style can be a refreshing and welcome alternative to the mainstream local scene.

As a photographer his work has been showcased in various local publications, shown at galleries, utilized in promotional material for bands and businesses, and is widely regarded for his professionalism and innate attention to detail.

While the digital age is upon us, Gary still retains the true art of film based photography and dark room development for much of his work. He knows his way around a computer of course, and is equally skilled with digital photography and processing as well.
UA-126403351-1